Sorry guys, I found a mistake in the pattern.

For the leg portion, where it says:

Do this for 14 rounds total.

Do this for 12 rounds total.

This mistake on my part won’t affect fit. It just means that the cabling on the icicles on the back of the leg are starting differently than those on top of the foot. If you are already past this point in the pattern, I would recommend just doing whatever you need to do to make the socks match.

Sorry for the error.

Hope everyone had a happy holiday!

UPDATE: Roseann found where a knit and a purl got transposed in the first round of the cuff. The first round for the cuff should be:

With finishing up the one pair of socks, it was time to cast on another project. Since a friend of mine gave birth to a son earlier in the year, and I hadn’t completed anything for said child yet; I decided that I needed to knit up something for the boy. (I did have a little romper cut out and ready to sew for him earlier in the year, but never go around to sewing it because of the accident put be behind on so many things.)

So what to make for the boy that is approaching the one year mark? 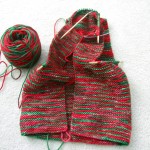 A red and green blob! Well, it looks like that in my fine photography, but it is actually the Modular Tomten Jacket by Elizabeth Zimmerman. I am using Sheila’s superwash merino worsted weight in the Rockin’ around the Christmas Tree colorway. I picked the colorway in part to motivate me to get it done before Christmas. So far, it has been a pretty easy, mindless knit. What you see there is about week’s worth of knitting, where I am finished the body, about to start the hood, and still need to do the sleeves.

I have also given a try at plying my first course from my Hungry for Handspun subscription. 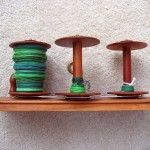 This isn’t going so well. The big bobbin is the single, while the other two are how far I got on each before the single broke. Not a whole lot of progress, eh?

The single keeps breaking on me. I think I am going to have to wind single onto a Woolee Winder bobbin in an attempt to get a more even feed, and thus less breakage. Hopefully, that will do the trick.

And for those of you anxiously awaiting the Winter shipment of the sock club, it goes out to you this week. I have started a “knit along” for the sock on Ravelry. What this basically amounts to is a forum where you can ask questions about the pattern and any techniques that you may be unfamiliar with. I will also be hosting some chats there. Here, I will be giving some basic instruction on what I do when making socks (things that will apply not just to the pattern, but to most of the socks that I knit.) Yeah! Blog-fodder!

Well, I don’t really know what is going on with my hosting provider, but things seem to be back to normal. (Keep your fingers crossed.)

I have been the busy little beaver in the past two weeks. For knitting, I have been working on this: 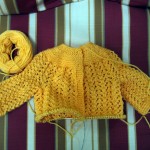 Yep, another February baby sweater. This time in Limbo (that is the name of the yarn, though I guess it is kind of in limbo since it is not done yet.) Over the other weekend, Mr. Penney offered to take me to Cloverhill since it was too early to head to the restaurant for dinner. Who was I to refuse?

I am making it for a co-worker who is expecting his second child, but first daughter. I was supposed to have another month before the mother was due, but I overheard the father talking about how the baby may decide to come any day now. Good thing this is a fast knit.

The other thing that is keeping me busy is eBay auctions. I went through my stash and put up on eBay whatever I knew I was never going to get around to using. I am clearing out five Rubbermaid boxes, thanks to this. (BTW, I will be offering up some superwash wool for spinning soon. That will be free to a good home. I will keep you posted on that.) Hopefully, it will all find a good home.

Just a quick reminder that the raffle for those that sponsored me in Race for the Cure is Sunday at 5 PM Eastern. If you have not received confirmation from me (either in person or via email) of the number of tickets that you have in the drawing for the scarves, please contact me via email or comment to this post.

I will be using Random.org’s sequence generator to pick the winners. Of the four scarves, three are complete and ready to be delivered. That last scarf is going on the loom now. It will be the winner’s choice whether they want instant gratification or not. (I am really liking this last scarf!)

Remember, 5PM Eastern on Sunday is the deadline.

Well, I am still having picture problems at the moment, which is a shame, because I have stuff to show you! Party. Finished socks. The start of pants. And yet, I can’t show it to you.

You see, my host had server problems a couple weeks ago, causing them to transfer my account to another server. Something happened in the transfer, as I have not been able to upload files through WordPress since then.

Hopefully, this will all be sorted out (I almost said “straightened out.” HA!) soon, as I have the post for the party, the socks, and the pants already written.

Well, it is that time of year; and keeping up with the leaves takes quite a bit of time. As one of our neighbors put it, “[The previous owners] didn’t tell you that you had another full time job, did they?” Last year, we had bags of leaves waiting to be picked up by the trash man until the middle of December. I am reconsidering whether autumn is my favorite season.

Also, the in-laws are coming! This Sunday! For a week’s stay! This is an opportunity for me to get to know them better, as I have only met them about four or five times, the last time being two years ago when I helped them pack up for their move down to South Carolina. Mr. Penney is anxious to see them, I know. Heck, I miss seeing my parents as often as I used to, and I get to see them a couple times a month. It has been two years for Mr. Penney.

I am trying to finish the spinning of September’s Hello Yarn Fiber Club merino, but it is going slowly. I don’t think I will get the single done before the weekend, but here is hoping.

Also, this Sunday, is the Race for the Cure, so if you would like a chance to win this:

please go here to find out more, and here to make a donation. Thank you to all who have donated so far. Your help is greatly appreciated!

There is some kind of misunderstanding on your blog.

They are saying that the socks are for me and that I should be conked on the head if I don’t like them. They aren’t for me. You are making the socks for yourself! Where did they get that idea from?

From the blog entry. The socks are for you.

Have you told me this before?

Can you edit comments?

No, but I can delete them.

Actually, it turns out that I can edit comments; but anyway….

We head off for vacation in Rehoboth tomorrow, so I will be out for a while. We will be relaxing on the beach (hopefully) and celebrating Mr. Penney’s b-day while we are down there. See you all late next week.

Well, I have changed the theme and added an anti-spam plugin. With the plugin, registration is no longer required, though a email address is still required. Lord, I hope this works.

Hallelujah! You no longer have to email me to be able to comment here. Here is what you do:

Get to the log in screen, via Comments. If you don’t already have a password and user name, select Register, and you will be asked to supply the user name you want and your email address. The password for the user name will be sent to the email address that you supplied, and you will be ready to comment. Email me at textillian@textillian.com if you have any problems (with the site, that is. Although you could email me with other problems, I guess.)