Well, I finally got it off the loom before it reach a year. 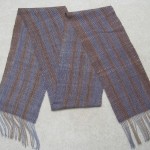 I basically had to bulldoze through this project because I wanted to use the loom for other things, but the yarn was too expensive for me to just cut off and call it a day. Here are my lessons learned from the project. 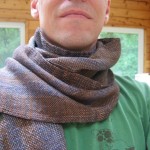 Looks dashing with a ratty old t-shirt, no?

5 thoughts on “Live and Learn”