Woohoo! Look what arrived on Wednesday! 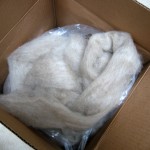 The fleece that I bought from Triple R Farms at MSWF arrived. Ain’t it purdy!

As you might have suspected, I have already started spinning it. 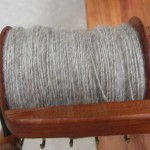 Being that it was over a six pound Romney fleece (though it may be less six now after processing), I have plenty to do. 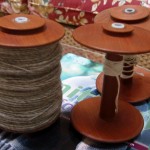 Without making myself a wreck over it, I am going to try to see how fast I can spin the whole thing. The two bobbins of yarn that you saw in the photos above took about five hours for me to spin. The weight of the yarn on those bobbins is about twelve ounces; so assuming that I have six pounds of roving, at this rate it will take me under forty hours to spin the whole thing as a single. I am not going to hold my breath on that though.

As I mentioned before, I am spinning this with intentions of weaving it into a blanket. Whether this will be a plied yarn, or if there will be any dyeing going on, or if I will be spinning up another fleece from my stash to go along with it is undecided. I am going to see how this fleece goes first and play the rest by ear.

Now, back to spinning.