Needles:
2.25 mm (I used a long circular needle to do magic loop, but use what you feel comfortable with.) 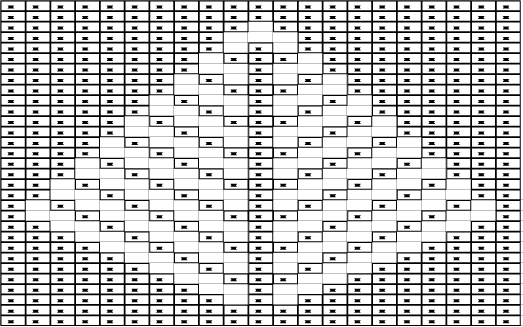 Foot:
Starting with the center stitch of the Ivy and Cable chart, work half of that chart, the first row of the Tree chart, and then the other half of the Ivy and Cable chart, moving the stitch marker over by one stitch. Work the rest of the round in st st. Work the charts for the top of the foot, and st st for the sole of the foot. Please note, the two charts do not sync up, so pay attention.

Heel Pickup:
You are going back to working in the round.

Gussets:
You now have divided up the sock into four areas, the top of foot, the two gussets, and the heel. For the heel portion (where you just left off,) work the same slip stitch pattern that you did for the foot flap (just the slip stitch pattern, omitting the garter stitch edge. Also, since you are now working in the round, those purl rows are now knit rows, but you probably already knew that.) For the top of the foot, continue working the charts. For the gussets,

The last chart is to give you an idea of how the patterns fall on the sock. The area with the white background is the top of foot, which becomes the front of leg. The green shaded area of the chart is the back of leg. Hopefully, that chart is of some help.

If there are any questions, just put them in the comments or email me, and I will try to answer them with my usual “clear as mud” explanations.