Well, with this happening this weekend 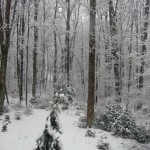 and the fact that everyone should have received their shipment now, I can now talk about Ice Ice Baby, the sock pattern I designed for Sheila, as well as the colorway that Sheila designed for it. Go no further if you haven’t received yours and still want to be surprised. 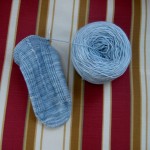 This is the colorway, along with the start of the actual sock. I am at the point of the gusset increases, here.

I love this colorway! It is even better than I had envisioned. The photo shows it as more stripey than it actually is. In reality (on my skein), the transition between blue and gray is more subtle. I think it says winter, without being white (for which I am not that crazy about, especially winter whites. I am not exactly sure why, maybe because I look washed out in them, like I am doing an impression of Casper the Friendly Ghost.)

As for the sock design, since I had winter as my season, I wanted something that really reflected it. I first thought was the holidays, but Sheila already has a Christmas yarn; and I thought it would be better to be non-denomiational, anyway. Eventually, I came upon the idea of icicles. But how was I going to do them?

My first thought was not a toe-up sock, but rather working the leg sideways, using short rows to produce the icicles with the natural variation in color in Sheila’s yarn. The foot would then be worked leg-down by picking up stitches from the leg and doing a normal sock foot pattern. I still might try this idea out, but this didn’t seem like a good idea for this particular sock, because why invite the toe-up sock guy to design a pattern for you, if he is not going to design a toe-up sock? So back to the drawing board.

One night, I was looking through my Vogue Stitchionaries, looking for things to interest me. I thought a cable might be a good idea for making something that looked like icicles, but I wasn’t sure how. Then I saw the stitch pattern that used right and left twists to move whole series of stitches to the right and left to create an even larger cable. I could use the same idea, but build up a larger cable up in size. The stitch pattern had been found. But how do I put it on the sock?

By the way, all this time, I was keeping Sheila updated of my doings. Ad nauseum. She was probably wishing she had never asked me to do this, as I must have been a pest. It’s a peril that comes with the territory of this kind of thing, I guess.

Anywho, my next problem was figuring out how to put the icicles on the sock, because I wanted them to be varying lengths, but not too hard to follow in a pattern. Remembering how Cat Bordhi did toe ups made me think of doing the same kind of structure could be used to create the heel for the sock while allowing for the stitch pattern to start a different points in the sock. I didn’t want to just copy any of Cat Bordhi heels, leading me to do the heel experiment earlier this year. Success!

Everything was all planned out now, I just had to knit the sock or so I thought. I soon found out that the cable increasing in size will need some increases in stitches along the way. Those cables, they are width eaters, as Cookie’s book will tell you. So, that sock got ripped. (Sorry no pics there, but it didn’t look too different from the next prototype. It just would never go on my foot. Literally.)

Next time out, I included increases in the cables. 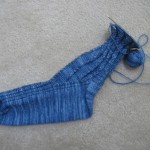 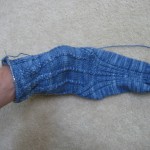 Some of my ideas were working out for me, others were not. It looked too cluttered to me with the ribbing on the foot and having eight icicles. Also, doing the twisting for eight icicles became kind of laborious for me, so I figured it would be a real pain for those that were just not that into cabling. So, revision ensued. 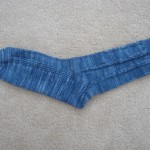 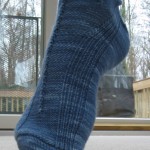 I reduced the number of icicles to six and added “white space” to the foot so things didn’t seem so crowded to me. (The prototypes were worked in Blue Bijou, as Ice Ice Baby hadn’t been dyed yet.) Everything was in place, and with a few minor changes to try to make the knitting a bit easier, the pattern was done!

While I am working on the real Ice Ice Baby, I am finishing up the garter stitch jacket. 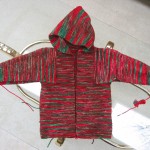 I am ordering clasps and just have to do some sewing up on the sleeves and knit the trim on the front. I will give a wrap up of this when it is finished, as there are some things I would do differently.

Next up, my general toe-up sock pattern to serve as an overview for Ice Ice Baby before getting into specific techniques.