Just in case you were worried: No, I have not stopped knitting. 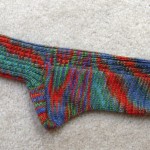 END_OF_DOCUMENT_TOKEN_TO_BE_REPLACED

Another thought popped into my mind on the way home from work tonight: Is there some kind of formula that you can just plug in the needle size, yarn diameter, and stitch pattern to determine the yardage needed to knit something? I ask because it seems like a basic thing, but yet I don’t remember hearing anything about it; and I don’t know whether it is just because I have been away from knitting for a while.

In weaving, one of the first things you learn is to calculate how much yarn you will need for the warp and for the weft of a project. This is mostly because, unlike knitting, you generally aren’t following an established pattern for an item. Yes, you probably picked out the pattern design for the cloth from a book in the beginning, but the dimensions and shape of the weaving project were totally your decision, not someone else’s. With knitting, at least for me, it was a matter of following someone else’s plan completely for the first few (thousand) projects before I started to change things around on my own and draw up my own patterns. Maybe this would change some if there was already a formula that existed that, after the knitter found a yarn and needles that worked well for a stitch pattern, she could just fill in a few blanks in an equation and know how much yarn to buy for a project.

I think the formula would involve needle size (in metric because there really isn’t much of a standard for US sizes,) yarn diameter (probably measured in wraps per inch to make it consistent with what is established among spinners,) and the number of changes between purl and knit stitches over a pattern repeat. I am not sure how cabling would affect any of this. Any thoughts? Am I making any sense? Am I not seeing the forest for the trees? Am I being to much of an engineer again?

Yesterday, I was cruising through some knitting books online and I was thinking, “Is wearing a tent really that fashionable nowadays? The recipient is going to receive this sweater, swear how much he loves it, and then, at best, only wear it when the knitter is around. Most people will swim in a sweater like that.” That seemed to be the chorus of the song that I was singing, so much so that I started a blog entry that was going to be a rant about how very few sweater designers (for handknitters, at least) seem to take shape into account and what will actually look flattering on a real person rather than a stick figure model or with a pole strung through the sleeves.

Fortunately, I did not bother to save that blog entry (though I did have a line in there that I was quite proud of for the humor. It made me chuckle, so it was worth it for that, if nothing else.) But on the drive home from work, it came to me that maybe there should be book about how to alter sweaters and sweater patterns such that end product looks good and is something that someone actually wants to wear for a reason other than someone made it for them. What Not to Wear is actually a bad example of what I was thinking about, as what proportions and styles are appropriate for a particular body type wouldn’t be the main emphasis for the book. The book would be more like Shirtmaking: Developing the Skills of Fine Sewing by David Page Coffin (an excellent book that I read at the beginning of the year.)

Here is what I think the book should cover:

Does anybody know if this has already been done, or if there is some expert that should be writing something like this? Because, if not, I just might do it.