About a month or so ago, I took a gander at our dishtowels, and thought that we could use some new ones around here. The towels are starting to show some wear after being used and going through the laundry about every week or so for about ten years. Besides, since moving into this house about three years ago, I really haven’t woven anything for it.

A while back I ordered unmercerized cotton from Halcyon to do some towels. 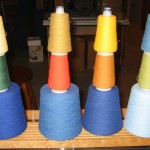 My idea behind the color selection was different skies that I find memorable (like a sunset or after a storm) as well as the sky and the grass. My plan was to select two of the larger cones for warp and use the smaller cones on top for weft, doing a weave pattern similar to Sandra does. (Check out her post before and after the linked one to see more examples.) I figured cloud outlines and landscape outlines would make a great basis for the network drafts. And it just might. Problem is, I can’t get anything I draft up to suit me. I think that I have a case of analysis paralysis.

This seems to happen to me with weaving more and more. I seem less and less willing to throw something on the loom and weave it and be ok with the fact that it might turn out to be something less than I expected. In my younger days, I used to do just that. It never occurred to me that anything I would weave would be anything other than sensational (at least for a beginner.) And if the end result was something other than what I expected? Oh well, lesson learned and onto the next warp.

Now, free time doesn’t seem as plentiful as it used to be; and there are so many ideas that are screaming to get out of my head and onto the loom, or needles, or wheel, or sewing machine, that anything that may result in something that I might not be happy with seems like a bad investment of that precious resource.

To try and get over this, I decided on doing a couple much simpler weaving projects: some scarves out of some worsted weight I got from Interlacements a few years back. Here are the yarns for the one scarf: 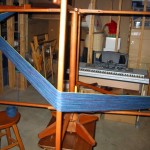 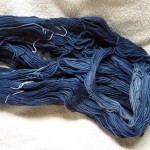 And here are the yarns for the other scarf: 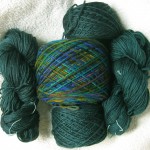 Even with these simple projects, I am analyzing the hell out of them. I have even questioned whether I want to weave with these yarns, or save them for some knitting instead.

But I am still moving forward with them. I already have both warps wound. And in all of this, I just remembered something. The end results are just the frosting on the cake; the journey to the end is what this is all about.