Both pairs are patterns that I have done before, for the most part. 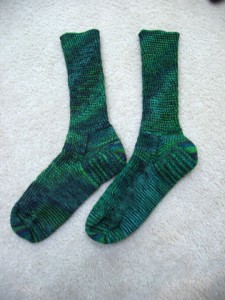 I previously did this pattern using Dragonfly Fibers’ Djinni in the Bad Moon Rising colorway. This time it is the same base yarn, but in the Tortuga colorway. 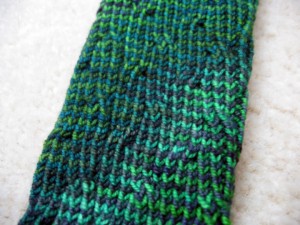 While doing all of the knit through the backs of stitches and all of the cables takes a bit of time, this sock pattern does something for me that no other sock does: Has a will of its own to stay put on my leg! Other socks seem to work their way down to my ankle after doing such things as crossing and uncrossing my legs, but this socks stay put; and I respect them for that.

Another reason for doing this pattern again is that I plan to write up the pattern. I had planned to have that done already, but plenty of other things have come up that have gotten in the way of that. 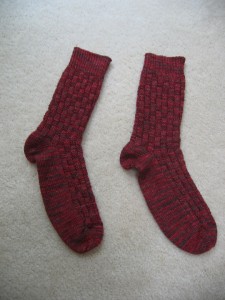 And this pattern is an old standard for me. It is one of my go-to patterns when I just want to knit something. It is from Schurch’s SKS book. The heel, though, is from her new book, The Sock Knitter’s Handbook: Expert Advice, Tips, and Tricks. 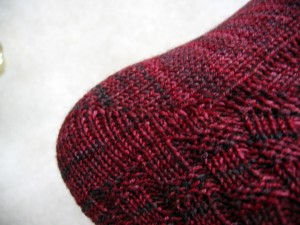 The heel is the no-wrap short row. While I like the actual results of the heel, I think that there may be an error in the instructions for it in the book. It seems that the count is off when going back to do the second half of the heel. Has anyone else tried the heel and found the same thing, or is it just me? I wound up changing things around to get things to work out the way that I thought that they were supposed to.

Now I have to figure out what sock I want to knit next. Not a bad position to be in!