These socks took close to forever for me.

I blame this on the needles. No, really. The needles. And those needles? Signature Needle Arts 6 inch double points. Why? Because they are too damn pointy. I was splitting yarn like I have never split yarn before.

I got the needles at last year’s Maryland Sheep and Wool Festival. I had heard so much about them, and such raves, that I thought that I would give them a try. To try them out, I made the socks above using Smooshy with Cashmere that I got from Cloverhill at the same festival. And a splitting I went with the first sock. Another problem that I had is that I had a difficult time seeing my stitches on the main part of the needle, as the needle’s color was close to the yarn that I was using. Maybe I just need better lighting, in that case.

The first sock took a darn long time, but since the needles were new to me and the yarn was new to me, I needed to eliminate one variable to see what was causing the splits. So for the second sock, I changed back to my Addi Turbos. No splits. Not a one. (BTW, Smooshy with Cashmere? Very nice yarn. Will definitely use again.)

Just to confirm, I started another pair of socks in a yarn that I have used before with no issues, Sheila’s Wullenstudio sock yarn. 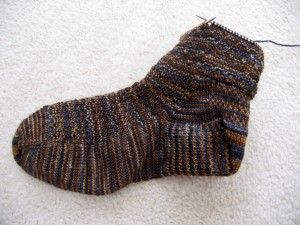 As you can see in the photo, I am back to using Addi Turbos. Why? Because I was splitting with the Signatures.

Now maybe all of those that rave about these needles aren’t using the stiletto points, but that is all that is available for the double points unless you get a custom order or get the 4 inch needles, which are too small for me. Or maybe they are using the needles with yarns that have a harder twist than what I have tried before. I will have to give that a try, as these needles are too expensive to just let sit idle.

2 thoughts on “Point of No Return”