Knitting is still going on here, especially with my weaving undergoing a re-group. More on that in the next post.

This is Elizabeth Zimmermann’s Maltese Fisherman’s Hat from Knitters Almanac. I used two strands of Berroco’s Ultra Alpaca throughout. Even with using two strands, the gauge only wound up being 11 stitches per 3 inches. The instructions are for 11 stitches per 4 inches. Luckily, most of the numbers were divisible by 3 in the pattern, so it was a simple matter to changing things over to meet my gauge.

I had to do this in quick order, because it is for a friend that is, literally, closing up shop and moving to Portugal. Yeah, wild thing to do! He wanted a traditional hat that is worn over there, and this Maltese hat was pretty close to the description, so I went with that. It took about all of 8 hours to knit. I used size US 10.5 needles (6.5 mm), which felt odd to me, being that I am usually working with 2.25 mm and 2.5 mm needles for socks.

And I am still working with those small needles, though. 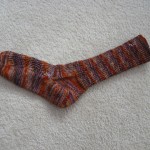 The first of the ribbed cable socks is done, and I have cast on for the second. I went to the trouble of twisting the knit stitches when doing the tubular cast off, since the whole rib is worked with twisted knit stitches. Now that I see how it looks, I am not sure if that addition effort for the cast off was worth it. Maybe it will be more noticeable after the sock has been washed.

I am also still working on the slip stitch sock. 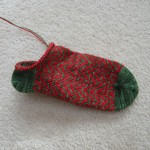 I did a short row heel because it solves a multitude of problems in doing things with a slip stitch pattern that I am just not sure how to do (like increases and decrease). Short row was always for the plan for me here, anyway.

I would like to know how to handle the change in colors in the round.

There is more than subtle change where the start of the round is. I am not to worried about it, but it would be nice if there was a way to avoid this. Since this is a slip stitch pattern, I have my doubts about whether a “jogless” jog would work here. Any thoughts?

5 thoughts on “Lucas with the Lid Off”