Well, it has taken me long enough, but I am finally updating my blog about the gradient spin along that Kimber of Fiber Optic had over on Ravelry. There were a lot of beautiful yarns spun up by people, some of whom even knit up the yarn in the time of the spin along. (Talk about over-achievers!)

When Kimber announced the spin-along, I immediately knew which of the gradients I was going to spin up.

Kimber had started offering pre-orders on a gradient every other week, and I believe this is the first one that I got in on. But while having the gradient picked out, I wasn’t sure how I was going to spin it, just what I was going to spin it for: to weave a scarf as a practice for a bigger project later on. Then it occurred to me, I could do something similar to what Deb Menz does in her book, Color in Spinning. 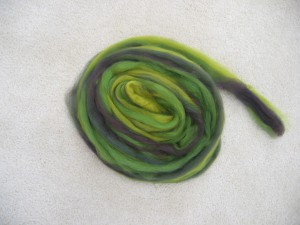 When spun up as a single, the color comes out kind of random in the yarn. 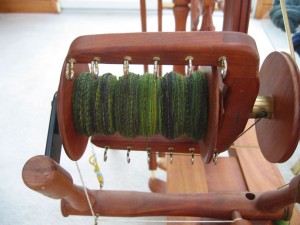 In time, I spun up both braids, and then plied. 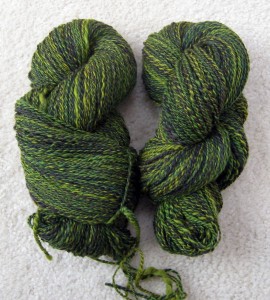 I do like the resulting yarn, though if I had to do it again, I would have done the first splitting of the fiber into more pieces (maybe six or eight) for shorter “color bursts”. I am pretty sure that I will be weaving with this yarn, as I have tried knitting with it, and while it looks and feels great, stitch patterns have a hard time fight against such a big mix of shades and tones.

4 thoughts on “And So It Goes”