Last time, I told you that I needed to get a new drive band for my wheel that I do my plying on, as the one that was on there was stretched out. Lucky me, I happened to have had one lying around, so I able to make the replacement and get back to plying and not have to wait for one to be shipped to me. Hurray!

Now, I have Bluefaced Leicester in blue and green ready to use. 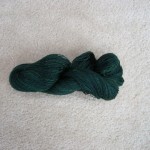 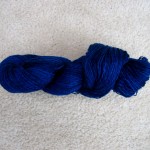 As well as eight ounces of merino/angora/cashmere. 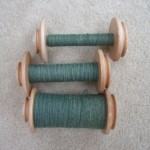 The bottom bobbin that you see above is the start of my plying and contains no knots. The one strand broke for some reason, and that is when I started the middle bobbin. When I ran out of yarn on one of the bobbins that held the singles, I wound the remainder of the singles on the other bobbin into a center pull ball and plied the strand against itself for the top bobbin pictured. It sounds like a lot, but it only took a couple hours. I have no idea of the yardage that I have there, but it should certainly be enough for a scarf.

Know what else is done? The Hark the Heraldic socks! 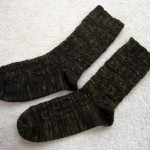 I am wearing these socks as I write this, and I can tell you right now that these socks are going to get a lot of use. The fit, the color, and the pattern are all working. 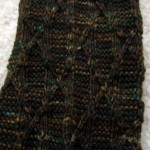 I am thinking of writing the pattern up. Yes, I like them that much that I might just write them up unprovoked!

With that pair of socks done, I started another pair of socks, this time from someone else’s pattern. From Think Outside the Sox, I chose the pattern Hexagons. 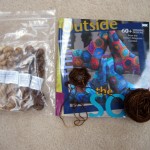 You may notice that the hexagon that I knitted is not closed up in the center. Why? Because, while it didn’t take me long at all to knit up that little bit, most of that time was spent doing the cast on, rather than knitting. It dawned on me that most of my time for making this sock was going to be spent casting on, rather than doing knit stitches. This spelt doom for this sock. While I don’t really hate casting on, I can’t say that I want to spend a good portion of my time doing it (or weaving all of the ends that will result.) So the hex is gone. Oh well, it all can’t be roses and sunshine. 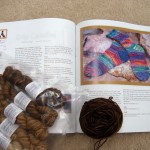 Instead of Hexagons, I am thinking of doing the Drip Candles pattern from the same book. I think the gradient of colors will work out well in this pattern. and I can weave in the ends as I knit. Still thinking though. Always thinking.