Sunday was the day. It was a great day for the race, weather-wise. It was sunny with a little nip in the air so that I wouldn’t be a sweaty mess. (I am told that I am the only person Mr. Penney knows that can sweat in the shower.) My goal for the day was to just get around the same time was last year, which was about 25 minutes. I have been having problems with my foot lately, so haven’t been training as much as I had in past years prior to racing, thus setting that expectation bar low.

When I arrived at Race for the Cure, I immediately started walking the mile to the starting line. One of the things that I learned from my previous years at the race is to get there early so that I can get a spot near the starting line. Of course, this doesn’t mean that those arriving after me are just going to fall in behind me. If you have been to a concert at a venue where everyone stands, it is similar to that because while you think you have a good spot, other people arrive later and decide that there is a spot for them right in front of you. It is strange how all this jockeying for position happens at the start of the race.

Once the gun goes off, the whole mob starts to slowly move forward past the starting line until the people at the very front move forward enough such that those behind them can make a full stride. After the first turn in the course, I have pretty much finished passing most of the people that I was going to pass (which are generally high school kids that were just playing around.) I got to the one mile marker and saw that I was only 7 minutes into the run. Huh? That is too fast. I am going to not have anything left for the finish. Dang it!

I am guessing where they start having water on the course is the halfway point, because this is where I am a pretty much running by myself. The front pack had pulled away from me, and those behind me hadn’t yet caught up. It was like a 15 foot buffer in front and back. I have never had this happen to me before. It was a very weird sensation.

Time at the two mile marker says 15 minutes. I am fading. I am breathing heavy. My shoulders are bothering me because of a deteriorating disc in my neck. People are passing me. Wow, I just had a little girl pass me! The good thing is that the guy on the side of the course is telling us that it is all downhill from here. How I want him to be telling the truth.

“Just keep going,” I tell myself. “It can’t be that much longer.”

Then, the next time I look up, I see the finish line with the clock saying 23:30. This is my second wind and I sprint to the finish (as much as I can at that point.) My chip time was 23:37.1, a whole lot better than I thought I was going to do. Woohoo!

After the race, it was still emotional to see everyone out for the cause. 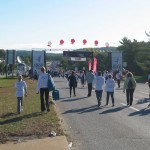 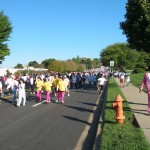 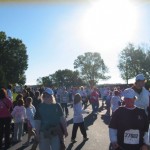 I visited a few of the sponsor’s booths and headed home, feeling just a bit proud of myself.

Thanks to those of you that have sponsored me. The raffle for the shawl is this Sunday. 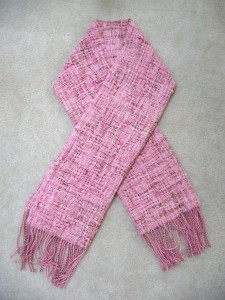 If you have mailed in your donation but have not received a confirmation from me yet regarding how many entries in the raffle you have, please contact me. I want to make sure everyone is counted.