I have just been finishing up projects left and right. Woohoo! (Ok, this is bound to happen sometime when you start a whole bunch of projects at the same time when you really shouldn’t; but let’s not focus on that part right now.) 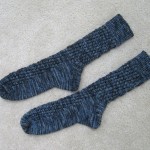 These were a b-day present for Mr. Penney. Knitting this pair helped me go through the write up for the pattern and find the mistakes. (I really should start keeping notes while doing these things rather than relying on my memory. My memory ain’t what it used to be.) I should have the pattern available soon.

And remember when I said I had about three more bobbins left of fleece left to spin? 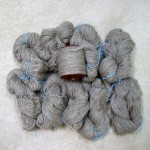 Well, I over-estimated. I had just one more jam-packed bobbin to spin of the wool. Of course, my not wanting to start another bobbin for the little bit of fleece that I had left meant that I was winding the yarn onto the bobbin by hand towards the end, as the yarn was rubbing up against the flyer of the wheel. Not the most efficient means of spinning.

Now that all of the spinning is done, I have decisions to make about what pattern I am going to weave all of that yarn into and what colors I want in that pattern. I purchased the dyes in colors that I think will work, and have some experimenting to do on some bits and pieces of gray test yarn that I spun up to get an idea of how the dyes will look on something other that white. I just need to see these things in person, sometimes.

And the scarf from the handspun? 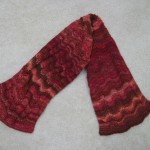 It is actually more of a muffler. All it needs is a blocking, which is something that I try to avoid for things that are gifts, as the recipient may be in for a shock on the first washing of it. Fortunately, I don’t think this will be something that will require washing that often. Unfortunately, I do not own a set of blocking wires, as I usually just wash things and lay them flat as opposed to pinning things out. (I rarely do lace, as you may have noticed.) Sounds like I have some shopping to do.