Well, another Maryland Sheep and Wool Festival has come and gone, and I have managed to keep my streak of being there when it wasn’t raining. I have been going to the festival for over 20 years now, and I have yet to be there when it is raining. Given how much rain we got this weekend, the record was really in danger, but I persevered!

I actually was at the festival Friday night, helping to set up the skein and garment competition. There weren’t as many entries as last year. I didn’t enter anything because I have been busy with other things and didn’t have a chance to make anything that I would think of entering. Maybe others were in the same predicament.

Mr. Penney and I arrived after lunch on Saturday. While there we got to see a number of people from the knitting group. Strangely, most of them were without any bags in their hands. We were assured that this was because they had already made a trip to the car to unload. One, however, had the right idea; and had her sons come along and carry her bags as their Mother’s Day gift to her.

I, of course, did make contributions to my stash. First place of purchase was Cloverhill: 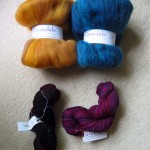 At the top is Corriedale from Grafton Fiber, while at the bottom is Dragon Sock from Dragonfly Fiber and Luxury Sock (a merino/nylon/cashmere blend) from Neighborhood Fiber Co. The blue Corriedale is already on the wheel.

After that, the next stop my wallet made was at Spirit Trail: 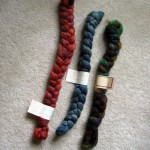 The first two braids are an alpaca/merino/tussah silk blend, and the last braid is superwash BFL.

Finally, after going by the both several times waiting for the line to go away, it became apparent that there was always going to be a line at The Fold, so I might as well just bite the bullet and go stand in it. 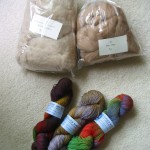 While Socks That Rock might be what everyone else was going for, I was interested in their exotic fibers for spinning. When I saw that they had two different, natural shades of baby camel, I was glad I took the time in line. Since I was in line anyway, picked up some skeins of STR lightweight in Jabberwocky, Scum Bubbles, and Bait-A. Amazingly enough, the women ahead of me went through the whole booth without getting a thing. No, really. Now there is willpower. (That, or common sense. Not sure which.)

6 thoughts on “Rain or Shine”