Thursday night, I start putting together this post by putting in the pics, save as draft, and presto! My site goes away. It is partially sorted out now, but I still have some investigation to do.

In any case, I decided to do an update on my knitting. (Yeah, I am still doing that!)

During that dismal period at the end of last year where I was spending way too much time at work, Mr. Penney would try to pick my spirits up by taking me to yarn shops to buy yarn. He knows me too well, doesn’t he?

On the one trip to Cloverhill, Mr. Penney spotted some yarn that he like. This, of course, meant instant purchase, and now the sock has been started. 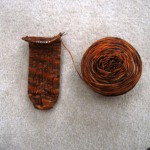 The color is Monkey’s Wrench in Sea Sock by the Sanguine Gryphon. It is moving along fairly quickly, though when I first started it at knit night, I had a problem. The yarn is the same color as some of the tabletops at Panera. It was like knitting camouflage. Now that I am past the toe, it is no problem, as I barely have to look at it now.

Something that I do have to look at is Tannenbaum. 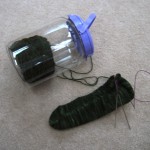 Yep, I have not forgotten about it. I just finished all of the decreasing for the flap heel, so it is pretty much smooth sailing from here on out. I do have to look at this sock while I am knitting it though. (Note to self: next time, make the charts line up better.)

There is new yarn coming into the house! I received the first shipment (Spring) from Sheila‘s sock club. 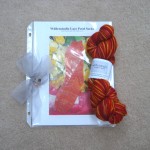 I also got this from Sheila for providing the name to a new yarn. 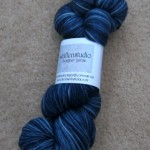 It’s “In the Navy.” See, if you bug a person long enough to make a color for you, eventually, they will! Ahh! The rewards of nagging! Next up, having her dye a rainbow yarn and calling it “Y.M.C.A.”